Last March, I went to a Dagstuhl Seminar on 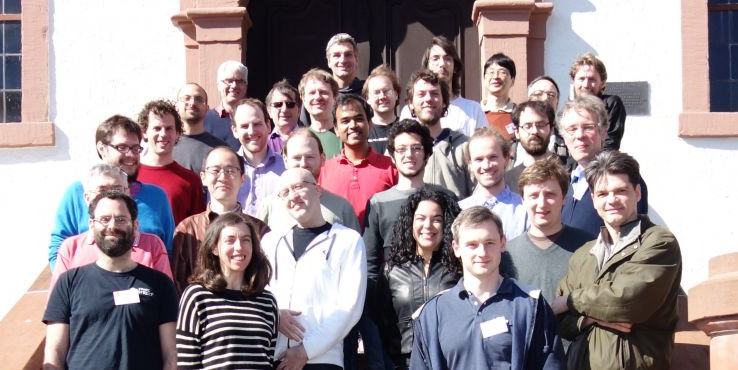 I'm talking about what I learned there.

None of the talk is about my own work.

A formal presentation of side-effects.

Proposed by Christophe Raffali in 2002, but forgotten.

Notice: here we need deep rather than shallow handlers.

Typing? How do we know which type k expects?

Instead of returning a value, one may perform an operation.

Change of viewpoint: we are not merely playing with delimited continuations (or resumable exceptions), we are defining side-effects.

(Side-effects implemented through control; “the mother of all monads”)

Claim: this is more structured, makes code easier to understand.

Nota Bene: we can provide different handlers for the same signature.

Why would user define their own effects?

But combinatorial explosion: you don't support all combinations.

What about mutable state that is rolled back on backtracking?

It's non-trivial to go from one presentation to the other. For a given application, one may be more convenient.

with some equations that those operations must respect. Examples:

A monad is the denotational semantics of an effect.

(It became a programming technique only later.)

Equations matter; but languages don't support them yet. Need for usable verification technology.

Handling concurrent effects with Set A or List A.

Constraining the producer vs. quotienting the consumer.

Relating an algebraic effect and its monad: State

What are the equations on state?

Normal form of a sequence of operations: Get; Set.

Normal form of a term:

(Want more on this? Read this blog post of Pierre Dagand)

Does this equation hold? Does this law hold?

One of the most impactful, overlooked open problems today.

One effect at a time:

computation of type a with monadic effects m ⇒ value at type m a.

The white lie of purity: do-notation is just as hard to reason about as imperative code.

Direct style: writing and reasoning on the effectful language.

Indirect sytle: writing and reasoning on the pure encoding.

Both styles are fine.

Two ways to get different implementations for the same effects.

You can also abstract over all monads providing given operations:

When do we need new/extended languages? Two debates: